Who's Winning the War for Mexico? 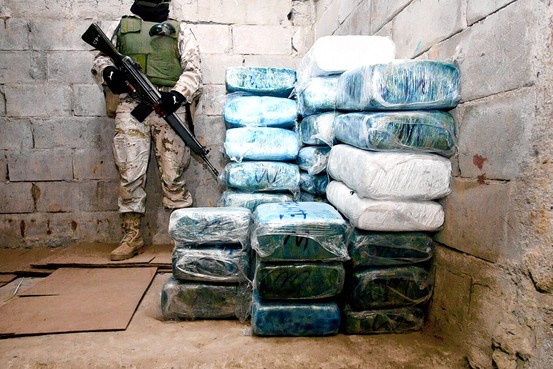 A Mexican soldierguarded packages of marijuana outside a tunnel discovered in Tijuana on Nov. 26. The 2,200-foot tunnel was used to transport drugs to the U.S.

Last week, U.S. drug enforcement agents uncovered a 2,200-foot tunnel for smuggling marijuana that ran between a private house hard by the border in Tijuana, Mexico, and a warehouse across the border in Otay Mesa, Calif. The tunnel was no crude construction; it had electricity, a ventilation system and a rail track for transporting drugs. Several tons of cannabis, bundled and ready for transport, were found inside.

Each week seems to bring new reminders of the severity of Mexico's drug problem, and Washington is starting to worry. The Mexican drug cartels, Secretary of State Hillary Clinton said this fall, "are showing more and more indices of insurgencies. It's looking more and more like Colombia looked 20 years ago, when the narcotraffickers controlled certain parts of the country." The statement caused an uproar in Mexico, and President Barack Obama took the unusual step of repudiating it publicly. But the similarities cannot be escaped so easily, even if Ms. Clinton doesn't have the parallel exactly right.

Though we are certainly not winning the drug war, it has changed in important respects in recent years. Two decades ago, when the Medellin and Cali cartels were at their height in Colombia, Mexico was largely a trans-shipment point for narcotics. According to the Justice Department, in 2009, the last year for which reliable statistics are available, most of the drugs coming into the U.S.—heroin, cocaine, methamphetamines, and marijuana—were either produced or refined in Mexico, although Colombian cocaine continued to be trans-shipped as well. Demand for particular drugs fluctuates, as in any market, according to supply and demand. At present, cocaine is down, but heroin and, above all, Mexican-produced marijuana and methamphetamines are up sharply.

This continued and still largely unstanched flow of narcotics into the U.S. is only part of the problem. Over the course of the past four years, fighting over turf and control of smuggling routes among the various Mexican drug cartels has made many Mexican cities and towns along the border virtual combat zones. "Amexica: War Along the Borderline," a recently released book by the British journalist Ed Vulliamy, paints a terrifying and authoritative portrait of this violence, in which at least 28,000 people have now died.

In an effort to restore some semblance of order, President Felipe Calderon has deployed the Mexican army, but despite some initial successes, the Mexican authorities have been unable to stem the violence. A cable from the U.S. embassy in Mexico City, recently released by WikiLeaks, notes that in Ciudad Juarez, one of the epicenters of the killing, only 2% of those arrested on drug or weapons offenses are ever brought to trial. And the violence is spreading. The northern city of Monterrey, one of Mexico's richest and most dynamic, is now the scene of considerable cartel violence. The tourist resorts of Cancun and Acapulco have also been hit, even if, so far, foreign tourists have not been targeted.

The fear in the U.S. is that the violence will spread north across the border. The fear in Mexico is that the capital itself, home to 20 million Mexicans, will eventually be hit. If this happens, the argument goes, Mexico will repeat the downward trajectory of Colombia during its struggle 20 years ago with the Medellin and Cali cocaine cartels.

But there are important differences. In Colombia, narcotraffickers like Pablo Escobar, the boss of the Medellin cartel, really did believe that they could force the traditional Colombian establishment to share political power. The Mexican cartels have killed a large number of local mayors and security officials, above all in towns and cities along the border, but so far they do not seem interested in killing leading figures in the Mexican establishment.

The crisis in Mexico is real and growing, but observers on both sides of the border have not yet come to grips with what can and can't be done about it. The expectation that Mexico, with U.S. help, can win its war on the cartels, just as Colombia eventually triumphed over its narcotraffickers, is based on an understandable but nonetheless dangerous misunderstanding. A sober look at what actually happened in Colombia would show us not the possibilities but rather the limits of what we can expect to achieve in Mexico.

Consider Plan Colombia, the long-term package of U.S. aid that allowed President Alvaro Uribe to prosecute a serious war not just against the drug cartels but against the FARC, the leftist guerrilla army that effectively controlled a sizable part of Colombia. Bogota was successful in finally turning the tide against the FARC, which was allied with the drug dealers and drew much of its funding from them.

But the two groups were not identical. Though the Colombian government's victory over the FARC heralded the end of a serious insurrectionary movement in the country, its success in breaking up the big cartels in Medellin and Cali emphatically did not break the back of cocaine exports from Colombia. The Colombian drug trade has been hurt by the government's advances (a recent UN report estimates that coca cultivation dropped by 18% in 2008), but the country remains the largest global producer of cocaine. Instead of two cartels controlling its distribution, now there are dozens. These smaller groups do not pose the systemic risk to the Colombian state that the big cartels once did, but their eclipse has not stopped the cocaine trade.

In some ways, the Mexican situation is even more difficult. Realistically, supply routes into the U.S. cannot be cut off, even if we were to build walls from San Diego to Brownsville and radically increase our interdiction efforts. Drugs now mostly come through densely populated urban areas along the border—precisely those areas, incidentally, where interdiction efforts have drastically reduced mass illegal immigration. These areas have by now become one interconnected and interdependent economic zone. The amount of cross-border trade is so great that interdiction, even with vastly increased resources, is unlikely ever to be all that effective, unless we are willing to radically diminish trade flows, which would wreck the legitimate economy on both sides of the border.

Nor are we making serious progress in the fight against demand for drugs on the U.S. side. Prohibition is not working any better with regard to Mexican methamphetamine and marijuana, and trans-shipped Colombian, Bolivian and Peruvian cocaine, than the prohibition of alcohol in the U.S. did in the era of the Volstead Act. Does this mean that we should legalize? My own view is that we should, as people with political views as different as George Soros and William F. Buckley Jr. have to one extent or another believed as well. But it is perfectly possible to oppose legalization without imagining, at the same time, that the laws of supply and demand are somehow going to disappear.

With diligence, patience, sacrifice and a little luck, the Calderon government in Mexico and its successors may succeed in eventually restoring some kind of status quo ante to the border, thus restoring calm and safety for bystanders and for the tourists whose expenditures play such an important role in the Mexican economy. But if we couldn't stop the drug trade from Colombia, which is far away from the continental U.S., what are the real chances of stopping the movement of drugs across a border that is all about the movement of goods?

We must not let our hopes, or the world we would like to live in, blind us to the realities of the world in which we actually live. Yes, the cartels need to be tamed, for the sake of both Mexico and the U.S., and the more resources that are committed to that fight, the better. But we should not delude ourselves that breaking the power of the big cartels will stop the drug trade to a market whose appetite for drugs is all but insatiable, any more than it did when the Medellin cartel was brought down in Colombia. That is a fantasy, and a dangerous one at that, for the authorities and citizens of both countries.

(The Wall Street Journal; David Rieff is the author of "A Bed for the Night: Humanitarianism in Crisis" and is working on a book about the global food crisis.)
Publicado por siguiente página / sábado, diciembre 04, 2010