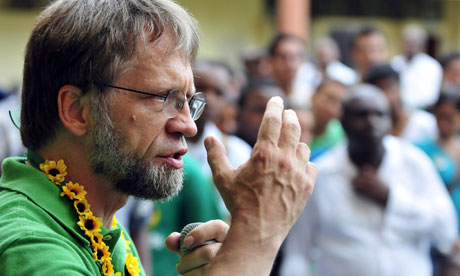 Say it quietly, but the next president of Colombia might not be a guerrilla-obsessed rightwinger. Just about everyone had expected Alvaro Uribe's successor to be a similar hardliner, such as former defence minister Juan Manuel Santos. Instead, Colombians are on the verge of electing a leader who will transform their parasitic political culture. Latin America's most exciting presidential prospect since Lula da Silva has arrived.

The great white hope is Antanas Mockus, candidate of the reinvented Green party. He has persuaded Colombians that they can do more than just insult their old-style politicians: they can vote them out.

Mockus is a former maths professor who left academia after baring his backside to a group of student protesters. Two years later, he was elected mayor of Bogotá. Politics did not make him much more conventional.

Between 1995 and 1997, he revolutionised security in the city, changing public attitudes and police tactics. Homicides dropped by 30%. Mockus refused city councillors' demands for pork-barrel spending, preferring to stall the political process than to buy them off. He launched tax reforms, including an additional voluntary payment for the wealthy, which helped Bogotá's citizens trust their government. While other mayors spent every last peso just for the sake of it, Mockus left behind an unprecedented budget surplus.

Put simply, he showed honesty, efficiency and imagination – qualities that progressive politics have been crying out for in Colombia (and Argentina, Venezuela, Peru). Brazil found similar appeal in Lula and his Workers party. But there's at least one key difference.

Ask an average Brazilian what's the best thing about Lula and she'll probably say that he has lived in poverty and wants to alleviate it. Ask an average Colombian the same question about Mockus, and the response is that he's a pedagogue, a teacher who encourages citizens to think and discuss. In other words, while Lula brings popular concerns into political debate, Mockus makes political debate into a popular concern. Latin America could use both approaches, but it has rarely if ever had a president like Mockus.

Indeed, after finishing his second term as mayor in 2003, Mockus seemed a has-been. He ran for president in 2006, winning only 1.2% of the vote. He wanted to promote "citizenship culture", but ended up in an ad campaign about gas leakages. He was a fading star, the embodiment of the Colombian phrase, "No one is a prophet in their own land".

By the time he launched a new presidential campaign in 2009, observers (including this one) had written him off. Colombian voters were demanding a strong leader who would stand up to the Farc, as Uribe had done. Many still rule out voting for a female candidate (Noemí Sanín of the Conservative party) for that very reason. Mockus's academic approach seemed principled but doomed.

Then in early April, having won the Green party primary, Mockus, aged 58, revealed he had been diagnosed with Parkinson's disease. Doctors opined his mental abilities would be untouched for 12 years, but surely voters would be put off?

Not a chance. Ahead of the election on 30 May, a recent poll puts Mockus in first place with 38% – a 9% lead over ex-minister Santos. That would put Mockus and Santos into a June runoff, where the former mayor could mop up enough votes from two other progressive candidates, Gustavo Petro and Rafael Pardo, to get the 50% needed. Another poll has the two neck-and-neck in the first round, with Mockus winning the run-off.

How is such a comeback even thinkable? In retrospect, Mockus's recent weakness was a reflection of Uribe's strength. Competing with a popular incumbent in 2006 was a fool's errand. But Uribe is now a spent force: the constitutional court refused his bid for a third term, and allegations of corruption and his attempts at health reform have damaged his popularity. A victim of Blairite hubris, Uribe is now scrabbling around in search of a legacy.

There's something else. Colombians want change. Their politics is not completely dysfunctional – ministries are filled with competent public servants. But the system is laced with corruption. Under Uribe, agricultural subsidies were handed out to powerful families, innocent civilians were killed by the military and dressed up as guerrilla casualties, the government allied with congressmen linked to paramilitary groups, and the security service spied on and intimidated judges and human-rights activists under orders from the presidential palace.

Mockus's campaign is an ethical backlash against this anything-goes culture. "I want us to cure ourselves of illegality," he says, proposing "Democratic Legality" to replace Uribe's Democratic Security policy. He labels public funds "sacred". Under Colombian electoral law, Mockus was entitled to £2.5m of state money for his strong performance in the primaries; he refused most of it. Meanwhile, the Santos campaign has allegedly threatened to withdraw state subsidies for those who don't support his rallies.

What about other issues? Santos and Uribe have tried to paint Mockus as soft on crime, but the homicide statistics in Bogotá – at one time lauded by Uribe himself – tell a different story. Mockus is out to prove, as he did as mayor, that the government can have more than one priority. He is best placed to expand the political agenda, bringing in social development.

Mockus has the backing of three other outstanding former mayors, including Sergio Fajardo, now on his vice-presidential ticket. On Facebook and at campaign events, there is genuine excitement at the alliance. If Uribe's popularity came from people's fear, Mockus's comes from optimism, especially among the young, that Colombia is ripe for a well-considered revolution.

Of course, observers of Latin America do well not to worship false idols. If Mockus is elected, he'll have to deal with a congress dominated by Santos's wretched U party, as well as the reality that the drugs war can neither be abandoned nor won. In any case, Colombia's political machines may rev up just in time to nick the presidential race for Santos.

For now, however, the momentum is with Mockus, and he has earned it. 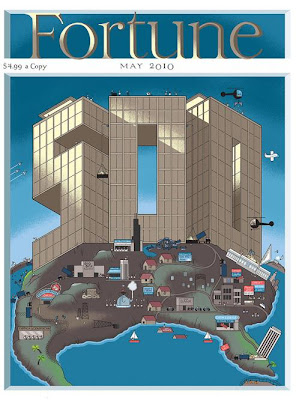