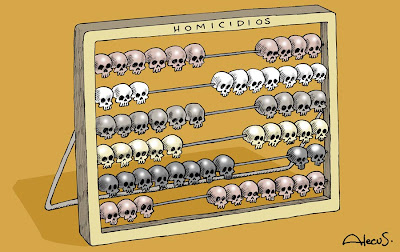 Media critics of Nicaragua leader Ortega made to pay

Chamorro is almost as emblematic of Nicaragua's 30-year-old Sandinista revolution as Ortega. During Ortega's first presidency, in the decade that followed the 1979 revolution, Chamorro edited the official newspaper Barricada, largely a mouthpiece for the Sandinista National Liberation Front, or FSLN.

But today, Chamorro is one of the most outspoken critics of Ortega; in a regular television program and a weekly newsletter, he routinely denounces what he says is widespread government corruption and abuse of authority by an increasingly heavy-handed president.

And Chamorro pays a price. Government security forces raided his offices last fall, confiscating files and equipment as part of a months-long prosecution of Nicaragua's most famous journalist on money-laundering charges.

The charges were bogus, Chamorro contended. But news outlets loyal to Ortega went into overdrive attacking Chamorro and lumping him with drug traffickers, mafiosi and other ne'er-do-wells.

"It was a very black campaign to discredit me," Chamorro said in an interview at the modest two-story house where he runs his journalistic enterprises.

The attacks on Chamorro peaked during a tense election season that saw the Ortega government harass a number of human rights activists and other critics, according to a recent report for the United Nations. The elections, to choose mayors in 146 municipalities, were won mostly by Sandinista candidates amid allegations of rampant vote fraud, denounced by the same activists Ortega allegedly sought to silence.

Verbal attacks against those "who dared to criticize the policies of President Ortega or his government were systematically and continuously taken up by the official or pro-government media," said the June report of the Observatory for the Protection of Human Rights Defenders. The official news outlets branded the critics "puppets of imperialism" and "traitors to the country," the kind of labels that could endanger their lives, the report said.

From his days as a guerrilla commander, Ortega has been hostile toward independent news organizations, favoring the use of newspapers and radio to further his political agenda or that of his party, the FSLN.

Since his reelection in 2006, Ortega has become even more mistrustful and secretive, critics and former allies say. His government, they say, doles out bits of information only to obedient news outlets that will deliver it unquestioned, and gives the silent treatment to the others.

Chamorro is the son of legendary Nicaraguan publisher Pedro Joaquin Chamorro, whose killing in 1978 helped galvanize the rebellion that ousted dictator Anastasio Somoza and brought the Sandinistas to power.

The family was famously divided by politics over the years: The younger Chamorro was in the Sandinista camp until the 1990s, when party hard-liners booted him from the editorship of Barricada; his mother, Violeta, the anti-Sandinista publisher of La Prensa, was the presidential candidate who defeated Ortega in 1990, ending Sandinista rule for 16 years.

Ortega says the Chamorros are "oligarchs," wealthy members of the elite who have built a media empire at the service of their own economic interests.

To counter the Chamorros and others, Ortega announced a new "communications strategy" after his 2006 election and named his wife, Rosario Murillo, to control it.

The government plans to "discuss the themes that we wish to discuss," said Ortega's document outlining the strategy. "We will define the boundaries of the discussion, and will try to see that all the others discuss this agenda."

Ivan Olivares, an economic reporter for Chamorro's Confidencial newsletter, said that even basic information, from pension and tax reform to Ortega's health, is hidden. Olivares was stabbed with a bayonet by Sandinista supporters during protests last fall over the municipal elections. He has a quarter-size scar on his belly that he calls "a souvenir from Daniel." Olivares did not identify himself as a journalist as he tried to reach the demonstrations because he said he was convinced he would have been attacked.

"There is a level of secrecy that is the exact opposite of what we who participated in the revolution valued, in terms of transparency and information," said Julio Francisco Baez, an analyst and expert in fiscal policy who served as an official in the first Ortega government.

Ortega has not held a news conference since taking office, his government ministers are generally inaccessible, and he denies government advertising to all but the most loyal media, according to a report by the New York-based Committee to Protect Journalists, or CPJ. His sole interview since reelection was with David Frost of Al Jazeera this year.

Many Latin American leaders do battle with critics in the press, the CPJ said, but "the degree to which Ortega has sought to insulate himself from public scrutiny is unusual in the region."

Requests for an interview with Ortega or Murillo went unanswered.

Ortega, Chamorro said, "sees media and civil society as obstacles to his plans."

What exactly those plans are remains cloaked in secrecy.