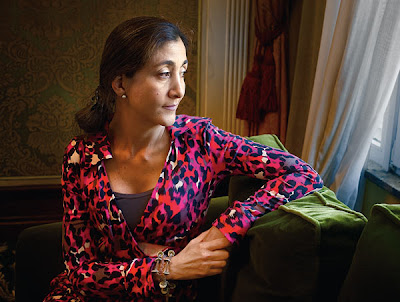 No one will soon forget 2008, a year defined by an extraordinary groundswell of hope (yes, that unavoidable word) as well as lie-awake-at-night dread (nothing quite like bracing yourself for the Great Depression 2, or, if you prefer, the snappier GD2).

It will take a while, of course, for us to grasp the significance of the events of this year, but some of the best books of 2008 provide a clearer understanding of the serious issues that confront us, from wars to financial woes. Many of the books also remind us, in these challenging times, of what is most valuable in life: family, friends, community.

But there's plenty in these titles - 50 fiction and 50 nonfiction - that allows us to escape our troubles and those of this world, and sink into tales well told. Baby, it's cold outside. Grab a blanket, grab a book, and enjoy.

This strange love story of a well-meaning giant named Awesome, a literary descendant of Rabelais' 16th century character Gargantua, completely ignores the traditional novel structure. Pendarvis pulls it off with a degree of magnificence.

In this powerful novel, Dai Wei, one of the main Tiananmen organizers, is shot toward the end of the demonstrations and lapses into a coma. But within the hulk of his body, he is struggling to keep himself alert by going over the events of his past.

The author opens his novel before Hurricane Katrina hits and follows two families through the storm and its aftermath.

A former Royal Air Force gunner who spent time in a Nazi prisoner of war camp decides to serve as an extra in a film about POWs being made in Germany. The novel does not flinch from war's complexities and realities.

What if we lived forever? That philosophical question plays out in this wonderfully absurd and meditative novel.

DIARY OF A BAD YEAR

Coetzee frames his novel not just as a diary of a lust-stricken narrator but also as a trickily wrought mosaic of viewpoints and voices, with each page divided into three discrete sections.

THE ENCHANTRESS OF FLORENCE

The story of a Florentine who travels to the court of the Mughal Emperor Akbar, relating to him an epic tale of adventure.

THE END OF THE JEWS

Radiating from three disparate settings - the Bronx of the 1930s, Prague of the early 1980s and Connecticut suburbs of 1989 - this novel follows the lives of a family of artists as they grapple with personal endeavors and relationships.

Harrison sends on the road a character in his 60s named Cliff, an ex-teacher, ex-farmer - in Cliff's assessment, "an old baloney bull."

From its first chapter, this novel is terrifying. The story is related backward from a child's life in the present to the life of his great-grandmother in World War II.

FINE JUST THE WAY IT IS

As with all successful fiction, one never senses here that the author, in her latest collection of stories, is orchestrating the character's failure rather than simply chronicling it.

A Bildüngsroman of urban America whose focus is what constitutes honor for a person of the lower classes.

FROM A TO X: A Story in Letters

An epistolary love story of two revolutionaries - Aida and Xavier - the latter of whom is serving two life sentences for unspecified terrorist activity.

The story of a 13-year-old whose life is torn apart by the death of her older sister. Prose allows humor and compassion to seep into an otherwise dark tale.

Tinti's novel has all the makings of a classic - a hero, a villain and a rollicking good tale set in 19th century New England about a good boy who gets mixed up with a lot of bad men.

An enchanting novel, set in England and told in the form of letters, that's traditional without seeming stale, and romantic without being naive.

An ambitious novel made up of many stories is intended to keep death at bay, while in serpentine fashion resurrecting the world in words with each day's dawn.

The stories in this collection spotlight Mexico, though more often than not the country is portrayed in less-than-rose-colored hues.

In this rich and beautiful novel, Robinson enters at closer range to the story, told by the Rev. John Ames in her previous novel, "Gilead," of Jack Boughton, the ne'er-do-well son of the dying pastor Robert.

Roth gives us Marcus Messner, a dutiful student at a white-bread college in 1950s Ohio. You'll never feel so alive as while fretting over Messner's pathetic fate.

LEGEND OF A SUICIDE

In this story collection, Vann looks into the dark and isolated American soul. It's a devastating journey that is difficult to read but impossible to put down and equally impossible to forget.

A delightfully mad first novel about a 1970s American rock star, Wheeler Burden, who is suddenly snapped back to turn-of-the-century Vienna for reasons he does not understand.

Centered on the investigation of a murder of a bartender in Manhattan, this novel shows that Price has a Dickensian grasp of crime as an act that inevitably involves and implicates many levels of society.

A ferociously beautiful work, filled with the scent of the late 1600s on the raw North American continent. Readers are plunged into the present-tense blood and sweat of it - slave trade, turf wars, sex, farming, pestilence - and in Europe, class struggle and executions as entertainment.

THE MONSTERS OF TEMPLETON

A disgraced Stanford student returns to her somewhat mythical hometown in New York and researches the history of her ancestors. Despite the darkness, the book remains lighthearted and magical.

A MOST WANTED MAN

A bold and angry tale about the colossal mistakes and human rights violations that nations are making by prosecuting a complex conflict with blunt instruments in the so-called war on terror.

This meditative novel builds an uncanny power through a labyrinth of memories that illuminate the narrative from within, just as its protagonist will discover the shadows of his neglected soul by bringing the story of another man into the light.

Unlike collections linked by one character, this novel in stories is a sort of prism, light reflecting differently through lives bound by common threads: desire for love and thwarted desire.

Krasikov deploys a quiet, unsparing voice, ushering us without fanfare into the lives of characters caught between Russian and American worlds in this excellent first collection of stories.

This collection gathers 21 of Wolff's most notable stories from previous books and adds 10 new ones. Its title sets the dominant motif: that we are the stories we tell about each other.

THE PLAGUE OF DOVES

Organized as a series of linked stories, the novel opens with a brief stand-alone sketch of an apparent mass murder by an unnamed individual.

A 42-year-old widower migrates from his destitute former Soviet country to England in search of work that will support his mother and his young daughter.

Imagine if Dickens had signed on for a berth on the Pequod. We get some of that fusion to great effect in this rather wonderful historical novel, set in the Indian Ocean.

Castellanos Moya looks at the lasting darkness left by the atrocities committed in Central America in this dark and, at times, comic novel.

If you enjoyed "Christine Falls," John Banville's previous book written under the name Benjamin Black, you will be delighted that this noir crime novel has the same protagonist, the offbeat Dublin pathologist Quirke.

SLEEPING IT OFF IN RAPID CITY: Poems, New and Selected

The longtime San Francisco poet has been quietly amassing a body of work that demands one's attention, as this ambitious collection amply demonstrates. Although he never commits the sin of taking himself seriously, his voice is sober and urgent.

This smart novel is the story of DJ Darky, an African American expat in Berlin who is a "jukebox sommelier" on a quest to find his doppelganger.

SONGS FOR THE MISSING

O'Nan's novel imagines the people left behind after a teenager's disappearance. It's about the ordinariness of unthinkable loss.

THE SORROWS OF AN AMERICAN

Hustvedt traces two generations of a Norwegian family and the relationship between personal identity and the identity of those who have died.

THE STORY OF A MARRIAGE

This is the story of narrator Pearlie Cook's marriage, back when she was a young housewife living in San Francisco in the '50s, when Pearlie thought that she knew who her husband was, and thought that she was happy. Then came a revelation that plunged her into a crisis one might call "existential."

THE SUMMER OF NAKED SWIM PARTIES

Set in Santa Barbara in 1976, the novel tells of 14-year-old Jamie's eventful summer, including her sexual awakening, a first encounter with death and dizzying swings between "popular" and "unpopular" status.

A first novel that often reads like a scrapbook of memories. With good reason: It's based in part on Kushner's family history. Her mother grew up in Cuba in the 1950s, at a time when Americans controlled the island's two most profitable exports: sugar and nickel.

Bolaño's final novel is maddening, inconclusive and long; hideous in parts and beautiful in others; exerting a terrible power over the reader long after it's done.

Lahiri continues to plow the fertile ground she sowed in her story collection "Interpreter of Maladies": Bengali immigrants and the culture gap between them and their American-raised offspring.

Selected and translated by Vladimir Nabokov; edited by Brian Boyd and Stanislav Shvabrin

THE WETTEST COUNTY IN THE WORLD

Based on real events involving his ancestors, this novel is the re-creation of a 1930s feud between corrupt officials and a gang of Virginia bootleggers. The result is a stunning literary amalgam of genres: the biography meets the mystery meets the gangster novel.

WHAT HAPPENED TO ANNA K.

It's possible to enjoy Reyn's novel without having read "Anna Karenina." But familiarity with the original novel does provide a wry counterpoint to this retelling of the story, now set in modern New York City.

An intellectual adventure story about a Beijing academic who, before the Cultural Revolution, conducts an agricultural project in Inner Mongolia, where he discovers an intertwined culture of people and animals, speculates on the wisdom of China's attempts to take it over and offers a eulogy to this once-ferocious way of life.

In this collection of stories, there are no heroes and few villains. Enright is tough, but sometimes tender. And she can be funny. (San Francisco Cronicle,http://sfgate.com/cgi-bin/article.cgi?f=/c/a/2008/12/21/RVBF14PE1F.DTL)