MEXICO CITY _ For decades, Mexico City has been famed for two things: its sprawl and its smog.

But if Mayor Marcelo Ebrard has his way, one of the world's most populous cities also will soon be one of the most green.

Under the mayor's ambitious Green Plan, a 15-year eco-roadmap launched in late 2007, the Mexican capital will have more bike lanes than Amsterdam and more rent-a-bike stations than Paris. All new buildings will be solar-powered and once filthy rivers will run clean -- or at least cleaner.

The program, which extends well beyond the end of the mayor's six-year term in 2012, is a novelty in Mexico's shortsighted political culture. It coordinates nearly two dozen government agencies, which are charged with meeting hundreds of environmental goals, from overhauling the public transportation system to halting rampant deforestation in the city's mountainous fringes.

Then there is Ebrard's pet project: convincing chilangos, as the capital's 9 million residents are known, to swap their polluting cars for bicycles. On the first Monday of each month, the mayor, of the leftist Democratic Revolutionary Party, joins several thousand city officials in biking to work.

"If we don't take the lead in what we want to do, we won't have authority," says Ebrard, who makes no secret of his aspiration to become president in 2012. "Because if I say, 'you go by bike and I'll go in my car,' it won't work."

Since taking office in December 2006, he has broken ground on a 12th subway line -- the first such expansion in decades -- and has begun swapping 14,000 smog-belching minibuses and taxis for cleaner models. His government has also poured millions into new sewage treatment plants and hiked water bills to discourage waste. Starting this month, residents who fail to separate their trash into organic and inorganic will be fined.

The Green Plan caught the eye of Bill Clinton, whose foundation has pledged $200 million to help Mexico City meet its goal of slashing greenhouse emissions by 15 percent by 2022.

"There has never been this interest, this priority given to the issue of the environment," says Martha Delgado, a former activist who now heads up the city's Environment Secretariat. "It's a very, very high priority for Marcelo Ebrard."

Environmentalists agree. But many are wary of the mayor's stated ambition to make the capital "the greenest city in the Americas."

"I think the goal should be that things actually work, rather than promising to be No. 1," says Bernardo Baranda, Mexico director for the New York-based Institute for Transportation and Development Policy. "It's a process and you can't do it overnight."

Ebrard must also bring onboard officials in neighboring Mexico State, which accounts for more than half the 22 million people living in the sprawling Mexico City Metropolitan Area.

Together, they drive more than 4 million cars, a figure that is expected to hit 6.8 million by 2020. Every year, some 4,000 chilangos die of smog-related deaths, according to the city's own figures. And the average driver spends three hours a day in traffic -- equivalent to eight years out of a 70-year lifespan.

Ebrard will also have forces of nature to contend with: Mexico City sits in a 7,000-foot-high valley rimmed by 13,000-foot volcanoes that act as a natural smog trap.

The capital is also plagued with serious water problems. Over-exploitation of underground aquifers has caused areas of the city to sink by as much as 10 inches a year, wreaking havoc on drainage systems and sparking severe flooding. Meanwhile, one-third of the drinking water must be pumped thousands of feet over the mountains from two river basins 80 miles away.

City officials acknowledge the challenges, which they say make the Green Plan that much more urgent.

"The most important thing is that we now have a route marked out of where we need to go," says Delgado. "It's very ambitious and that's how it has to be, because the lack of environmental ambition has led to the mess we're in today."

Sean Swoons Over Raul! Haven't We Seen This Flick Already?

I think Sean Penn is a great actor.

He ought to stick to acting, though. Because he is to journalism what his ex-wife Madonna is to rocket science.

There was SO much I was tempted to write about this horribly embarrassing "interview" with Raul Castro Penn has on the cover of The Nation magazine this week. But I'll keep it short and let y'all squirm through the original copy.

I will say: It's written like he's the winner of The Oliver Stone Bad Writing About Cuba contest.

I thought Oliver's painfully pliant lay-down session with big brother Fidel a few years back would have been the final chapter in Hollywood celebrities slobbering over dictators and demagogues (though Danny Glover has been pretty shameful in his public worship of Hugo Chavez).

But now Penn pops up giving his own tongue bath to Raul -- complete with poems and everything.

I gotta say, I understand the glorification of a somewhat mythical (if now addled) figure like Fidel. After all, Fidel is Fidel. But Raul? He's never been anything but a dreary bureaucrat known for his dumb loyalty to his brother and his rather steely, authoritarian stewardship of the Cuban military. No one actually likes Raul. They only fear him. Except Sean.

The most stupefying passage from Penn's paean to the creaky current dictator of Cuba is one -- near the end of the piece-- where he writes: "The hour was getting late, but I didn't want to leave without asking Castro about allegations of human rights violations and alleged narco-trafficking facilitated by the Cuban government."

Allegations of human rights abuses? Allegations in a country that has been ruled by one family for 50 years, where there are no recognized civil liberties, no political opposition tolerated, where notions of freedom of press, expression and assembly are punishable in courts which provide no independent defense for the accused? Where the death penalty is applied with no appeals process? Where possession of dangerous books can land you in Boniato prison? Where the Web is blocked? WTF?

Of course, Penn answers his own minor doubts about these accusations by reminding us that the U.S. itself violates human rights just a few miles away in Guanatanamo -- and, um, so what? And for good measure, he quotes Raul saying these allegations are, of course, exaggerated and inflated by paid agents of U.S. Imperialism. All those dissidents are on the pad.

The truly maddening part of this whole exercise in vanity by Penn is that his sojourn to Havana was motivated in great part by his desire, he says, to discuss the results of the recent U.S. presidential elections with Raul. He might have, for the hell of it, asked Raul when the next Cuban elections might be scheduled. But, alas, I think such fancy notions still remain in the category of mere "allegations."

Penn does confess that if he were a Cuban writing as critically about that country's political leadership as he does about his own he would certainly wind up in jail (true). And while he says he was thinking about raising such questions directly with Raul, he decides, nah....he's got other things on his mind. Anyway, it would sort of be an impolite act of coitus interruptus.

Penn's apologia for the dictatorship are of the usual sophist construction. Cubans (and Venezuelans) he tell us, could make an historic choice between our imperfect system or their imperfect system and they chose their own. Scratch that poorly used adjective of "sophist." Replace it with a reeking arrogance. What we have is an ultra-rich mega-star deciding for the Cuban people that they should settle for "imperfection" -- as he politely calls it. If we don't settle for it in our country, why are Cubans --standing in ration lines-- supposed to be so damn grateful to a tyrant that feats an American movie star and pretends he's a journalist worthy of a seven hour interview?

Here's a video clip of a somewhat dazed-looking Penn explaining why he went to interview Castro and Chavez (the Venezuelan portion of Penn's master thesis apparently coming out in print next Monday on HuffPost).

Two questions are raised by this clip. Why do millionaires have holes in their jeans? (That, we'll never know). And, why, if Penn was traveling with historian Douglas Brinkley and the rather accomplished political writer Christopher Hitchens did the Cuban dictator decide to grant the interview only to Penn (That, by contrast, seems rather obvious, no?).

This would be a great time for The Nation to produce a probing piece from Havana on, precisely, how Obama's election might or might not change both internal Cuban political dynamics and U.S.-Cuban relations. Instead, we get this slobber from Penn.

Let's hope he gets tied up with a a lot of new movie deals. I much prefer to watch him on the screen than read him in print.

For an infinitely more incisive and -- I might say-- a more morally elevated discussion of Cuba from a thoughtful and quite courageous Cuban writer, I refer you to the dazzling Generation Y blog from Havana-based Yoani Sanchez. Please check it out and make sure you cast a vote for her blog which is currently up for a Bobs award (Yoani has already won the coveted Ortega y Gasset prize -- which is probably what keeps her out of jail).

Here's an excerpt of one of her recent postings titled "I'd Love to Choose.". It cuts neatly, simply and cleanly like a blue-steel machete through the sort of drivel produced by Penn:

For weeks, there are words like "ballot box," "votes," and "candidates" that persecute us everywhere. First there were the elections in the United States and now the issue has been revived with what happened on Sunday in Venezuela. It's as if at the end of the year everything conspires to remind us of our condition as non-electors, our limited experience in deciding who leads us.

You become accustomed to not being able to choose what to put in your mouth, under which creed they will educate your children, or to whom to open the door, but that resignation shatters when you see someone else vote. Because of this it has risen up, these days, the desire to fold the ballot, to push it into the slot and to know that with it goes my stentorian shout that demands: "to choose."

What a romantic this gal is. She should just accept the imperfections of her system, shut her yap and go see a movie or something. 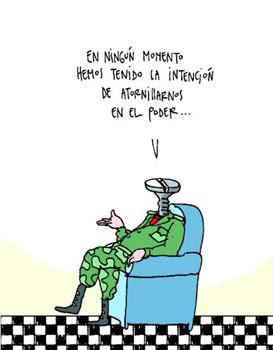